Remember when you were a child and wanted to fly?   Well maybe in the foreseeable future you can consider the option of flying to work or even college. The Concept of Flying to work like the cartoon character of the 50’s and 60’s George Jetson is no longer a flight of fancy but a real possibility. Zeva Aero plans to make that dream a reality and certainly has a very unique solution. The GoFly Prize is a $2,000,000 challenge by Boeing to create a personal flying device that is safe, useful, and thrilling.

The goal of the GoFly Prize is to foster the development of safe, quiet, ultra-compact, near-VTOL personal flying devices capable of flying twenty miles or more while carrying a single person. 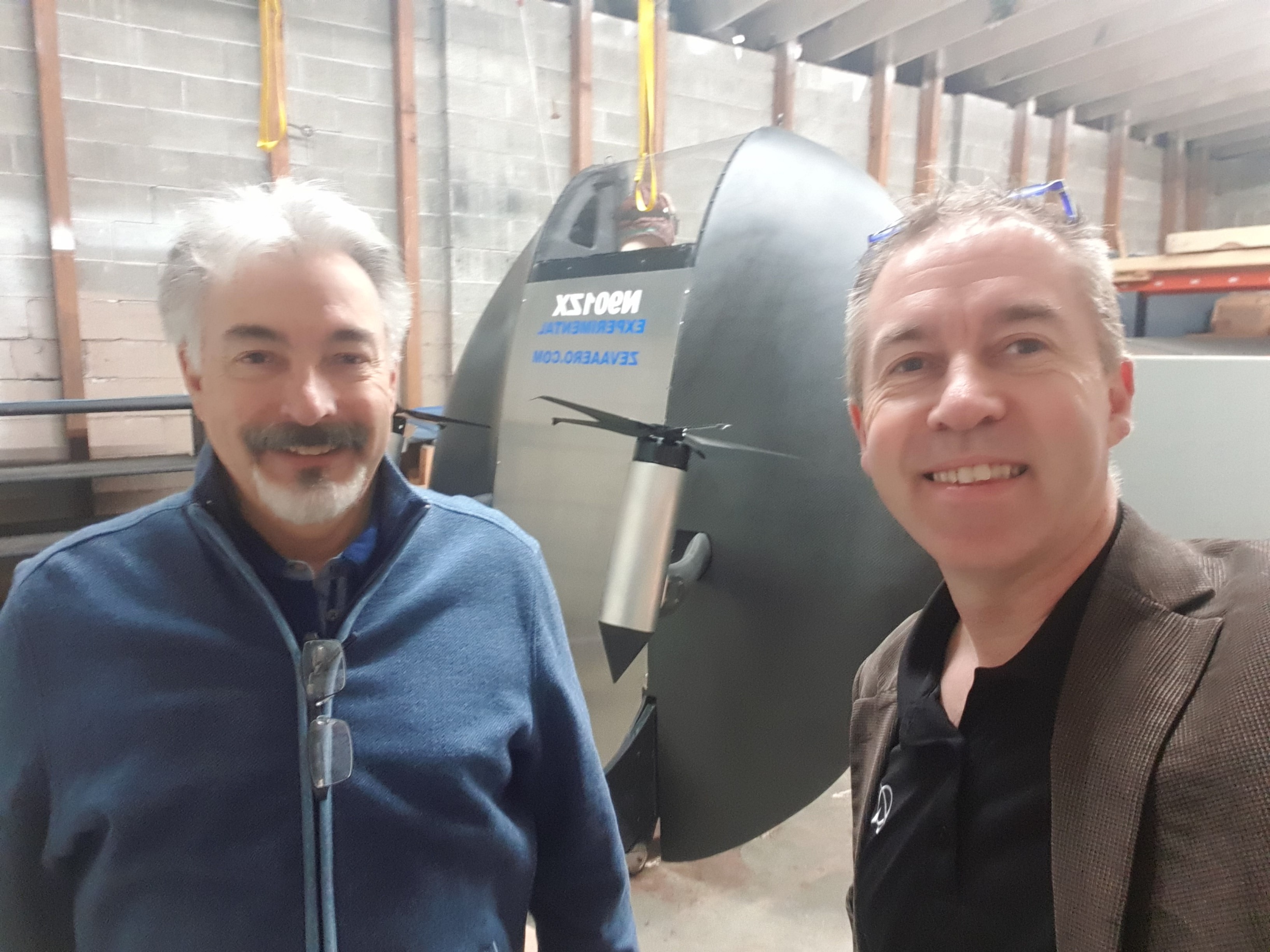 An opportunity recently came along for our Director Kevin Burtchaell to at a recent Seattle Christmas Party networking event to offer Keltia’s Design Services to support Zeva’s project especially with their Landing gear requirements. As a former Boeing Landing Gear Engineer, Kevin has a network of industry contacts that were quick to put together a few concepts for the next stage of the Zeva development. Stephen explained about the GoFly Challenge 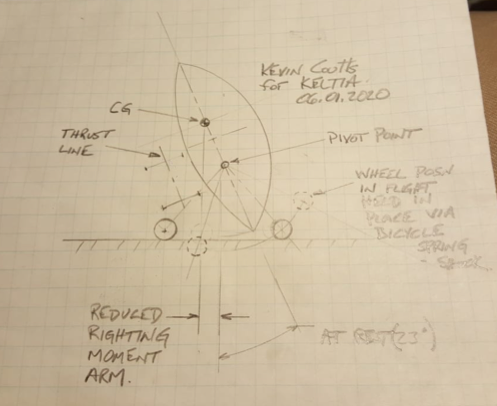 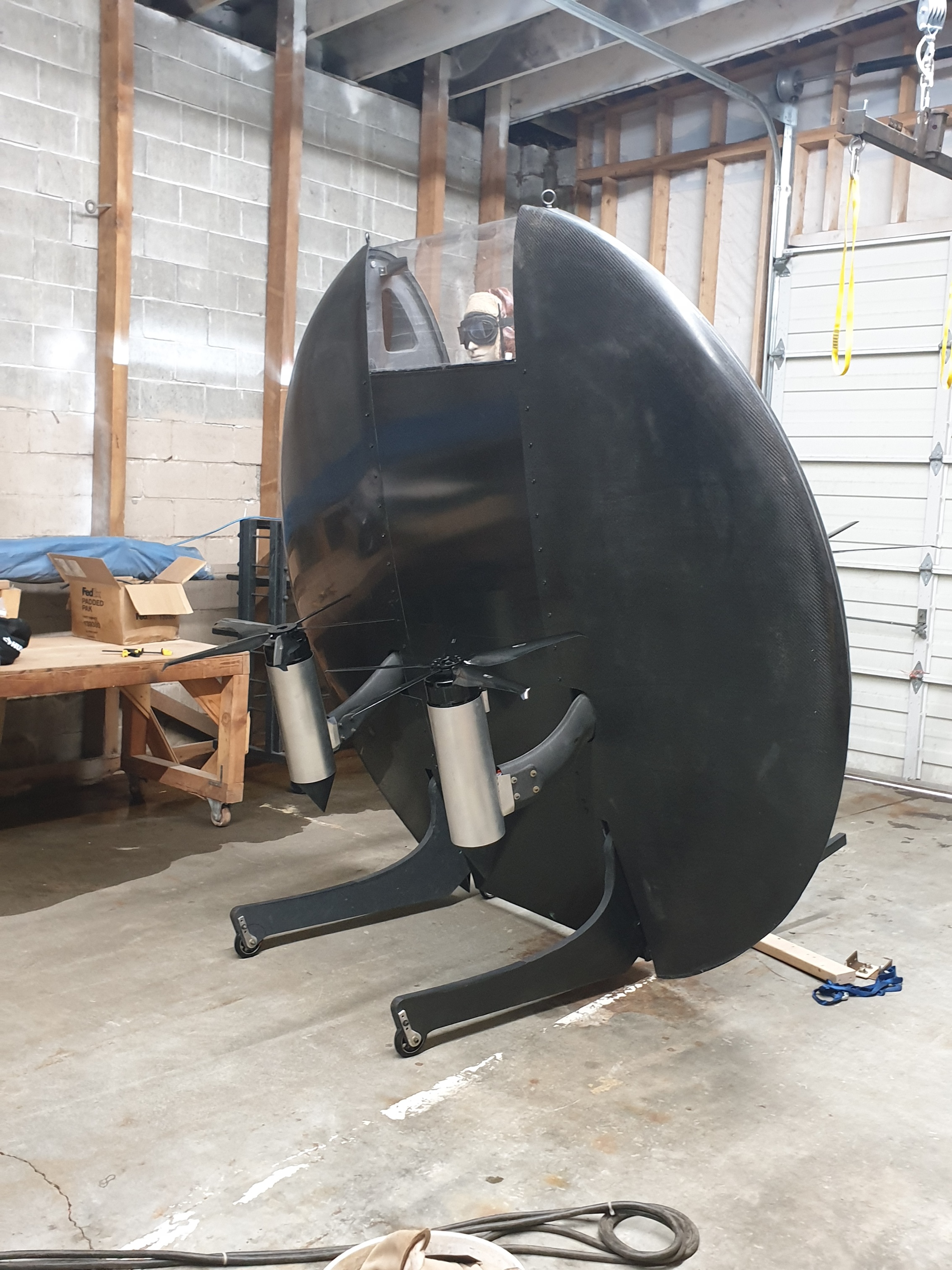 Kevin Burtchaell was given a tour of the Zeva facilities by Stephen Tibbitts Chairman & CEO at Zeva Aero at their start-up facility in Tacoma WA near Seattle.

A large round disk standing upright with a small glass canopy on the top edge from which a pilot’s face peered out.  Stephen explained  ”The ZERO is a flying wing which transitions from a vertical hover mode, to a horizontal forward flight mode cruising at a speed of 160 mph (258 kph) blending the best features of a multi-copter with a streamlined wing.”

Movies and magazines have portrayed fabulous flying devices to avoid the long lines of city traffic on your Daly commute to work. Whether we remember the Jetsons cartoon intro or numerous cover of Popular Science or the unforgettable police cars in the movie Blade Runner, the concept of a flying car is both the symbol of an elegant future and a cliché pie in the sky impossible dream. Dismiss your scepticism and replace it with increasing optimism as considerable interest has been shown in the concept of the flying car and three-dimensional urban travel devices from some very serious players in the automotive and aerospace industries.

Its vertical orientation when landing allow 2 Zeros to fit in a single car bay or can be docked to the side of a city skyscraper with the aid of the SkyDock(patent-pending) illustrated in Zeva Aero’s promotional video. This is an important feature says Zeva because as air-taxis become more widespread by 2025, the challenges associated with operating these devices in public areas seems like an obvious impediment for some competitors. SkyDock will allow passengers to travel from a skyscraper to another skyscraper and land at any floor where the SkyDock is located. 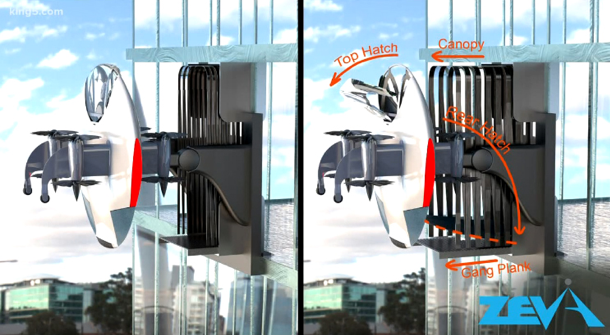 An eight-engine battery powered prototype has already been tested with excellent results an Zeva is now moving forward with a full sized version. A full-size mock-up was already on display in their workshop when we visited.

As of this date there are somewhere between 150 and 200 Personal Flying Machines at various stages of development around the world.  Flight trials of China’s EHang,  Germany’s Volocopterhave recently taken place last November at the Dubai Air show. Boeing is offering $2,000,000 in prizes as part of the GoFly personal flying device Design competition early this year. The Concept of Flying to work like George Jetson is no longer a flight of fancy but a real possibly and Zeva Aero certainly has a very unique solution.

Talk with us about your project

Call us or Email for a no-obligation opportunity to discuss your idea and business, and explore the challenges you are facing.

Engineering Services
CAD TRAINING
Contract Engineers
We use cookies to ensure that we give you the best experience on our website. If you continue to use this site we will assume that you are happy with it.OkRead more